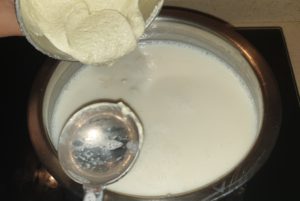 Mor Kulambu is a buttermilk based south Indian soup variety similar to Sambar/Rasam category. It is also similar to Kadhi in north India.

Making Mor Kulambu  is very easy . This can be prepared in 2 versions. You can make this Kulambu either with Vegetables ( Vendakkai/Okra, Chow Chow, white pumpkin )or with Masala Vadai ( paruppu vadai).

In South Indian tradition,  this dish is also used to make fun for its hospitality practice. When you observe , this dish is used to be served at the end of the rounds of serving. If any of guests stays more than comfortable days, this dish is served as a signal for them to make their travel plans to leave the house as the house feels that guest has been well served so far and nothing more left except buttermilk and spicy chilli.  So, be careful when you serve for anyone who is traditionally orthodox  visits you. LOL 🙂

For this demo, I am preparing with masala vadai.

For Mor Kulambu base:

For Grinding for Mor Kulambu : 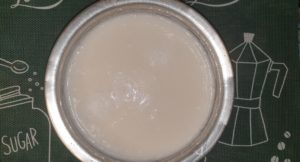 Add Turmeric powder + Hing in the buttermilk and mix it well.

Now add the paste to the Kulambu base.

Mix it well without lumps.

Keep the bowl in the gas top and switch on to a medium/low flame.

Carefully heat it to avoid stickiness at the bottom of the pan for 10 to 15 minutes.

DO not over heat/boil the contents - stop the flame as soon as you observe boiling bubbles in the corner of the bowl.

Tempering for the Kulambu:

Pour the tempering mixture to the Mor Kulambu and mix again.

Cover the Kulambu for 5 to 10 minutes and keep aside. This is to let the spicy, aromatic coconut oil flavor mix well with the Kulambu.

Plain Mor Kulambu is ready now. Pls note that tempering must be done with coconut oil.

Serve the Mor Kulambu with white rice. You can even serve this variety as a standalone dish as MorKulambu Vadai. Enjoy.